Why Cricket Needs it's Moneyball Moment

I have played a bit of cricket in my time (rare enough for an Irishman I can assure you). I was always intrigued by the stats surrounding the game; averages, strike rates, 50’s, 100’s and 5 for’s. But I always considered them a rather crude instrument to measure performance on the cricket field. There must be a better way, but still do this day, as we the ashes is over, the stats they use today are the same as they were for Don Bradman and his generation. It’s good to be able to compare past and present players but is it time for a change?

Baseball started collecting stats in 1876 and it took until 1998 for 1 team, the Oakland A’s to re-examine the measurement of player performance, and it wasn’t until 2004 that the rest of MLB took note. That is a staggering amount of time (over 100 years), before anybody stopped, looked at what the norm was and said I’m going to do it differently.

There is more money in baseball than cricket and perhaps that would suggest why it became so important to value players correctly. However there must be similar inefficiencies to be found in evaluating cricket performance. I highlight some of the obvious ones below and some possible suggestions for improving them.

The first assumption here is that all wickets were created equally. If you compare one bowler (Bowler A) who took 4 – 67 and compare him to another bowler (Bowler B) in the same game who took 4 – 67 you can not distinguish their performance from the stats. Only people at the game adding subjective analysis can distinguish between the performances. Bowler A could have taken the first 4 batsmen and Bowler B could have taken only the tail-enders. However the averages don’t allow for a distinction.

It’s not easy to find a solution but one possible solution is to come up with a weighting system – where by wickets are given a weighting, dependent on the level of the batsman (average/skill level/world ranking/recent form). This would seem the only fair way to reward bowlers for taking wickets that are clearly worth more or less than others. One other proviso I would like to add here – bowlers often, but not always work in tandem. For example if one bowler is keeping it tight the batsmen might decide to ‘go after’ the other bowler and end up playing more shots than normal and scoring quickly or getting out (Think Glen McGrath). Again it is unreasonable to let the tight bowler go unrewarded, however this is a much harder variable to calculate.

Equally for the batter there are situations that are more rewarded than perhaps they should be. For the batters, all runs are created equally. Getting 20 runs off the last 2 overs to win a match is valued as the same as getting 20 runs off the first 10 overs, at the start of the game. Is this really fair? Devising a weighting programme for runs scored is much more difficult as there are many more variables to consider but I still think it should be examined. Even allowing for strike rate as a measurement is not sufficient on it’s own as it only tells a story when combined with total runs scored and the situation of the game. If a team is chasing 100 in 50 overs, against a great attack on a bad pitch strike rate is not relevant but it will effect the batsmen’s average strike rate.

One last thing, somebody who scores 99 is valued as considerably less than somebody who get’s to 100 – why such a disparity over  1 run? 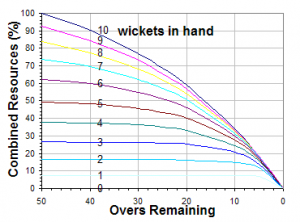 It seems obvious to me that the game situation needs to be factored in to averages in some way. One possible way to do this is use a similar system as the Duckworth Lewis ( a method for predicting scores affected by rain). You can’t apply it exactly, but the D/L method does do a pretty good job at examining the game situation by using available resources as a measure of the possible score.

‘Each team is taken to have two ‘resources’ to use to make as many runs as possible: the number of overs they have to receive; and the number of wickets they have in hand. At any point in any innings, a team’s ability to score more runs depends on the combination of these two resources. Looking at historical scores, there is a very close correspondence between the availability of these resources and a team’s final score, a correspondence which D/L exploits’.

It should be possible to come up with a way to value runs and wickets depending on the situation of the game or their importance to victory. For a game that has always relied so heavily on its statistics it seems that a huge amount of subjective analysis has to go with the stats to make them meaningful. The success of the Oakland A’s and their ‘new stats‘ has brought a new wave of geekness to american sports. Surely similar inefficiencies exist in cricket – room for somebody to make a name for themselves!