I’m Andy Boles and I’m the Head of Academy Sport Science at Hamilton Academicals F.C., which up until recently, has generally meant that I’m involved in fitness testing, nutrition support and physical training of all academy players. Before undertaking this project, I had almost no experience of PA – neither my B.Sc. (hons. In Physiology & Sport Science) or M.Sc. (in Strength & Conditioning) covered the subject. I was aware of the benefits of software that allowed basic tagging of events (my exposure was with Focus X2), however there simply was no budget to invest, an unfortunately common situation in Scottish football.

Here is my experience of setting up a Performance Analysis system at my club.

An open-source sports video analysis tool called LongoMatch (http://www.longomatch.ylatuya.es/index.php) was recently brought to my attention, meaning that I could have some of the benefits of video analysis without the cost.

Hardware wasn’t an issue as the club already had a digital camcorder and I had tripod stands from an electronic timing gate system I use to test players speed. A decent camcorder and tripod are essential to capture quality clips, ensuring the statistical data I capture later in analysis is accurate. Also important in this stage is the consideration of vantage point, which is discussed in other posts on this site. I am fortunate enough that the majority of our under 19s games are played in mini stadiums which at times can be little more than glorified wooden huts! Nonetheless, I am usually able to get an elevated position on the halfway line to film.

Step two: What do we want to know? 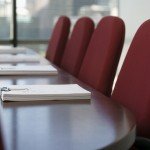 This may seem an obvious step to some, but in order to get a good system in place, you need to choose what you want to measure carefully before you start. The initial temptation to measure everything doesn’t last long, when you realise how long it’s going to take one person to do!!

To start off, I had a consultation meeting with different coaches to discuss which key events they would like to be tagged with the aim of allowing the coach to review key parts of the game at the click of button, instead of searching to find them on one big video file. The tags we decided to start with were:

Before I started to tag the events in a game, a list of definitions was drawn up for each of the above events, giving examples of when a play/event would or would not be included in analysis. For example, we agreed that an over-hit through pass that reached the opponents goalkeeper would not be counted as a Shot on Goal. Likewise if a defender under pressure cleared the ball and it reached an opponent without trying to pick out a specific teammate, it would not be counted as Lost Possession.

So, now I was able to film a game, put it in my laptop and tag major events. The Coaches could watch the full game or focus on these key events quickly to look for things that worked well or recurring problems that need to be fixed.

Step three: Taking detailed data from the game (aka the boring bit) 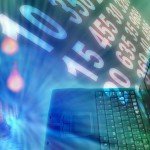 Having some decent experience in storing and analysing data using various spreadsheets, I thought we could do more than just bookmark key events for coaches to review performance. I set about creating a spreadsheet that could easily display team and individual performance data such as pass accuracy. I chose to look at:

Firstly, I created a basic sheet to capture the data (shown below). Next, I watched the full game again, noting a tally mark every time each player made each action. A separate sheet was used for 1st half and 2nd half to allow comparisons. Again, a definitions sheet was also drawn up too. 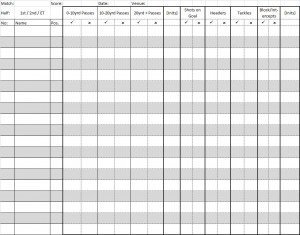 Next, I created a simple Excel Spreadsheet where I would enter the raw data and the formulas would work out total actions and success rates. This includes a summary sheet and a detailed analysis sheet (below).

Summary Sheet for a match: The detailed sheet is very wide so I had to present it as a portrait, but I hope it illustrates how I can capture data for a wide variety of actions on the pitch.

This is an area previously covered by thevideoanalyst so I don’t want to go into much detail. Needless to say, you must have a trusting relationship with coaching staff and with the players in order for information to be accepted. It is also extremely important to be objective!! Don’t try to favour teams or players!!

Stage five: The next step…

The next step for myself is to catalogue performance for each player throughout a season, analysing statistics for many games at a time. I’ve started building the excel database, with pics below. The first picture is of all the players in the teams averages throughout the season. Each player will have a tab at the bottom of that spreadsheet with their performance data in each game throughout the season (2nd picture) listed there. 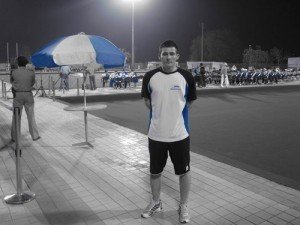 I hope that this outline of setting up a performance analysis process could be helpful to coaches and sport scientists faced with similar restrictions as myself. I’d also like to thank Rob @ thevideoanalyst for his help and advice in setting up this project. Of course, any questions or comments are more than welcome. You can also follow me on twitter (@Andy_B123).

I would like to thank Andy for taking the time to write this article and having been so willing to share what he does. Andy has given a great insight into life at a pro club on a limited budget. Despite the lack of budget he has been willing to put in the time and effort to make performance analysis a worthwhile exercise for the club. If you’d like to share your experience or thoughts on Performance Analysis drop me a line; robcarroll@thevideoanalyst.com