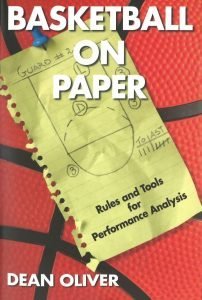 Been there, done that, wrote the book on it. For most of us that is nothing more than a butchered cliché but for Dean Oliver, it’s the truth. He is considered ‘the Godfather of Advanced Basketball Analytics’ and the first ever data analyst in the sport. With the introduction of player-tracking with cameras hanging from the rafters of every stadium in the NBA that measure everything from the biomechanics of a three-pointer to the deceleration speed of a careening point guard, it’s easy to forget that we are just a few decades removed from a time when none of this information was available and charting a game meant breaking out notepad and pen to write down every movement of every player.

Oliver was a player, a coach, a scout and eventually an analyst as he went in search of answers to questions that had never been asked before. Despite the swatches of books on how to better evaluate talent and basketball that have emerged since, Basketball On Paper is still considered a must-read for anyone interested in understanding both basketball and the numbers that underlie it.

Nowadays, the way to figure out a metric or to devise a ratings system, you have to be able to acquire data either by downloading in CSV format or being able to scrape websites. For Dean Oliver, after reading Bill James’ Baseball Abstracts, he sat down and decided he was going to chart games himself. “I just sat down and charted basketball games in some detail and that opened up a world of structure that I hadn’t seen before,” he says.

In his seminal book, Basketball On Paper, he thanks his father early on for buying Bill James’ Baseball Abstracts. It was those books, James analysis and the thoughts that it provoked that led to what we now know as the full-blown revolutions that includes numbers, algorithms, stats and probability. There are a multitude of names for what Oliver does and he concedes in his Basketball on Paper that “this book was conceived as an aid to coaches in a more general manager.” He provides within it “formulas for evaluating a team and the contributions of individuals to team success”. These same formulas “arose out of a desire to better describe the goals and structure of the game.” 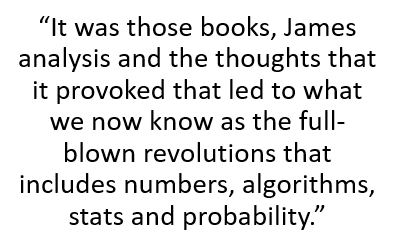 After studying a PhD in Environmental Science and Engineering, Oliver got a job as an engineer; But at the same time, he was thinking about basketball and how to apply some of James’ principles to the game he loved. He soon realised, however, that the general formulas used for baseball would not work with basketball. This provided both a problem and an opportunity. There was nothing really to build off but he also had a clean slate. If American football is a game played with military precision then basketball is a form of jazz. Oliver thinks the same and says there is much more happening, more flow and more moving parts in a game of basketball, which makes it harder to track but also leaves more opportunities to innovate.

At the same time that Oliver was writing Basketball On Paper, Michael Lewis was writing Moneyball – the story of how Paul DePodesta pretty much changed baseball with his statistically-driven approach that saw the Oakland A’s win at baseball despite spending a fraction of what the rest of MLB was spending on building their team. It was the first time anybody had made statistics accessible to a wider population and turned it into the one thing people love and need; a narrative and a look at the people behind the keyboards to cheer for and aspire to be. Lewis made data analytics cool. That book was released in Spring 2003 and Basketball on Paper came out in October of the same year. On January 2nd 2004, Oliver quit his engineering job and decided he would try to make a go at analysing basketball statistically as a career when he saw the rise in demand for a Moneyball-styled basketball revolution. In August 2004, he joined the Seattle SuperSonics and has since worked with the Denver Nuggets, ESPN as their Director of Analytics, the Sacramento Kings and the Washington Wizards.

If you listen to Dean Oliver’s message, it’s all about practicality. He says “I didn’t try to say analytics before anyone knew what that was. I said I have an ability to use stats to help answer basketball questions” to ensure he didn’t scare people away. When he first came on the scene with a head-full of ideas and a hand-full of experience as a player, coach and then scout, people were already using the very basic aspects of basketball analysis that we know now and make up the very fabric of the game and the conversation even the most cursory fans are having both on and offline. He admits that when you’re trying to push an analytically-driven approach and trying to introduce a new strategy based on numbers, you need to get lucky early because if the initial test runs don’t work, sympathy is hard to come by.

It was completely new but he knew he had to be careful with his message. It had to be a forceful side of persuasive without being aggressive for fear of alienating some of the more traditional thinkers. That remains the same today even if most coaches are now at least willing to listen even if they don’t fully comprehend or appreciate what is being said. But this was back at a time when even baseball’s analytics revolution was still in its most nebulous stages.

Bill James changed baseball when he sat down and figured out how many runs a particular baseball player adds to the team based on his on-base percentage. And how many extra runs you might need to win one more game per year with his Pythagorean theorem of Baseball. That gave way to people like Rob Neuer and several of James’ disciples and those reading the books who were influenced by him. Dean Oliver was one such person and in the acknowledgements in his seminal book, he thanks his Dad for buying him James’ work. Straight after that, he thanks James for writing it and “then for releasing the methods to those of us who follow.”

Oliver, as Bill James puts it, “is really struggling to understand the actual problem,” which is something that might get lost nowadays. Along with the likes of John Oliver’s PER, Oliver’s Four Factors were the initial all-encompassing statistics that gave us an overview of a player’s worth. They also spawned several other, possibly better, statistics overviews and the foundations of the most advanced analytics in use today. 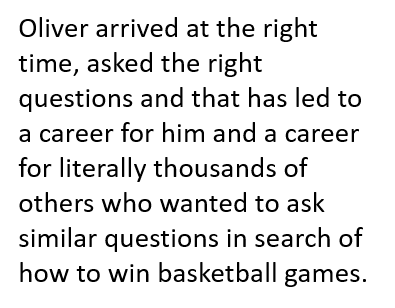 Each of the four factors carries different weights and, as Oliver discovered, shooting the ball is the most important thing. If you wondered why the Golden State Warriors were so good (although it’s not really that hard to understand why) you need to look no further than their ability to shoot the ball well consistently. This kind of work, which seems so obvious now, was ground-breaking then.

Oliver finds the balance between forcing statistics onto coaches who would rather not listen and implementing some of the best analysis in the game is a fine one and both sides of the argument need to be respected. He says many of the best coaches have an intuitive sense for what numbers tell you without ever opening up Microsoft Excel or learning how to program. Phil Jackson, for example, subconsciously knew what value certain players added. Even if he never believed in statistics, a lot of what he believed would correlate strongly with what the numbers say.

Every single basketball team in the NBA is using data analytics today. Some are more gung-ho with their approaches but all of them are using it with some of the league’s better team having full departments of their office dedicated solely to finding nuggets of information that can help them win games, win in the draft, be more savvy with salary cap and avoiding injuries and training overload. For all of that, you can thank Dean Oliver.

When you have Bill James, widely considered the man who started everything you see today in sports from a statistical analysis standpoint, saying “I learn a lot by reading him” then you know you’ve pulled off something special. Oliver arrived at the right time, asked the right questions and that has led to a career for him and a career for literally thousands of others who wanted to ask similar questions in search of how to win basketball games.

This article war written for thevideoanalyst.com by Robbie Dunne, An Irish based journalist based in Madrid and author of Working Class Heroes: The Story of Rayo Vallecano, Madrid’s Forgotten Team. You can find him on twitter @robbiejdunne.