I really like getting information and articles from other people, (it means I don’t have to write everything) but more importantly it’s a chance to hear other peoples  points of view and ideas. Last week I was sent the article below by Stuart Dawson. I really like this piece because of it’s simplicity. Stuart has picked one aspect to measure over a 6 week time period and has used Spain as an example for his players to emulate.

I have coached football to children for around 16 years and have followed various coaching manuals. I have felt that teaching them to pass the ball well was like banging my head against a brick wall until I began to immerse myself in the world of performance analysis.

This idea is very simple and fairly easy to do and it works. (I wonder how many professional academies and schools of excellence do this sort of thing, let me know if you are an analyst at an academy, I would be interested to hear what you do.)

The sessions I ran had a theme of passing and keeping the ball. I used the example from PROZONE of Spain from the last World Cup, to get the point across about the value of keeping possession, to the players and parents.

The coaching sessions consisted of working with the players on the key points of passing and receiving. These sessions ran for 6 weeks. At the end of each session the players have a match for the last 20 minutes which was videoed. (Permission was requested from all parents before I did this). I am fortunate that the school I work at has a wall running alongside the pitch so I use this to get a reasonable, safe vantage point on the halfway line. I simply hand notated the successful and unsuccessful passes for each player but broke this down into 5 minute sections. The analysis takes about 30 minutes to do with another 10 minutes of work on excel to produce the graphs.

The players receive the feedback at the next session in the form of an individual graph and individual targets are discussed. See fig 1.

The graphs throw up some interesting information particularly as the analysis is broken down into five minute sections. Averages for the group are worked out; these are for frequency of passes and percentage success rate. If a player is above both these averages they achieve star player status for the week. 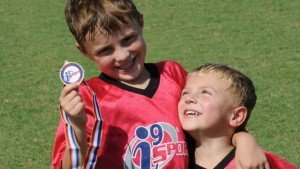 I found that this really motivated the players and focussed their minds when it came to the matches. They especially enjoy getting the feedback. I have also used the analysis to make team choices and those who were left on the bench were given an explanation of my decision which again helped to motivate them to improve.

I feel it is valuable to give the players experience of performance analysis for many reasons. The players were really responsive as were the parents as they realise that the players they look up to use the same systems, so why not them?

This is an excellent example of a simple but effective use of Video and Notational analysis. It has introduced the players and parents to performance analysis and not made them frightened of it. Stuart can easily now expand the areas he looks at without intimidating the players. What is even better is that he has done all this for the cost of a video camera. So, that proves to me, there really is no excuse for coaches not giving analysis a go. Great work Stuart.

If anybody has any other examples of how they have applied analysis in similar situations I’m sure everyone would love you to share some ideas.