3 Lessons From the Opta Pro Forum

Thursday 6th saw the first Opta Pro Forum (#optaproforum). A mix of clubs, bloggers, stattos and exectutives were present to hear 9 presenters take to the stage and present their research findings. The 9 presenters had to beat off some stiff competition to get to the stage.

The presentation were videoed and I am told will go live at some stage soon. Rather than concentrate on any of the talks themselves which you will be able to watch for yourself I thought it would be better to give you an outline of my 3 take-away’s from the day.

Every single presenter stood up and said they wished they could have added more context to their work. I will repeat that – every presenter mentioned context! Despite the media bashing of statistics and statisticians trying to define everything in football by numbers,  none of the presenters were suggesting this. They all realised the limitations of their work both in terms of being able to add context and not understanding the sport to the same level as coaches and managers involved in clubs. Most presenters said their work would be advanced by being able to work closer with experienced coaches who understand the ins and outs of the game.

If nothing else I (and many others) would love the media to pick up more on these points. Rather than trying to explain everything, analytics is trying to explain more than we can by just watching and with the partnership of coaches, managers and owners the analysis done could be infinitely better. 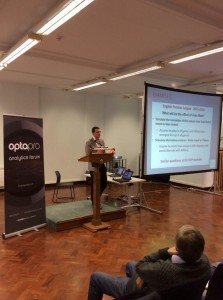 One of my favourite talks on the day was by David Hastie (and Martin Eastwood, Daniel Edwards) from OnSide Analysis. Despite the title which was definitely not simple the presentation gave a fascinating insight into the possibilities of applying what if analysis to football and getting some reasonable conclusions. Something very similar to this work in Basketball; http://grantland.com/features/expected-value-possession-nba-analytics/

Actionable – can you actually do anything with the findings? If not why did you bother doing the research?

Simple doesn’t mean it has to be simple research but it does mean you have to make it simple for people to understand. 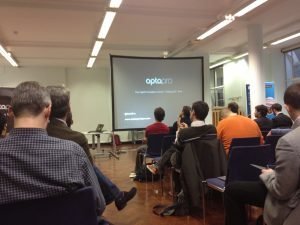 Pedro Marques from Manchester City was one of the presenters and it was really great to have someone from a Premier League Club present. Again I’m not going to discuss the actual content of Pedro’s talk rather the brilliant method he showed how the analysis team get from Data Analytics to the Pitch. Pedro described himself as a coach first and now feels like he has a foot in both camps – this is probably why the delivery of the analysis works so well. In a nutshell the work revolved around passing patterns and looking at influential players when scouting opposition.

With data collected by Opta, Pedro and some data scientist geeks conduct in-depth research – a quite detailed and possible ugly report comes back to Pedro within a few days. Pedro turns this into something much better looking which he can then present and explain to the coaches. Pedro then sowed a clip of a training ground exercise where the players were practising what they were likely to face next weekend.

What I loved about this is that despite some detailed and no doubt complex data analytics being done –  by the time it gets to the players, this ‘data’ is a relatively simple training ground exercise. In this case the Performance Analyst is acting as a translator – someone who understands both worlds and can communicate effectively with both. Perhpas the future role of performance analysts at clubs is not to be data scientist, video analysts and coaches but rather the conduit that brings all these elements together – as Pedro and other are doing at Man City?

P.S – One other lesson I learned is that statistically speaking to get from the Marlborough Arms to Heathrow in 1.5 hours with the underground on strike and no Taxi’s available is statistically unlikely – luckily I was an outlier and made it.